- A "pilot flight" is a single performance by one pilot. - A "flight program" is a group of performances from multiple pilots of the same category, one each, under the same set of rules. Sometimes we just say "flight", and that can refer to either a pilot flight or a flight program. To be clear, in the following, we've tried to use the two word designator unless it's crystal clear from context which we mean. A "category" is a group of flight programs flown by a group of pilots. It is the largest unit of competition for a contest. Pilots compete in individual flight programs and in categories. There are multiple categories at a contest. The categories generally differ by difficulty and have category-specific rules or limitations.

Category Results on the Contest pages

The contest pages display results for each category flown in the contest. The results show each pilot in rank order of overall standing and each judge who graded one or more flight programs of the category.

The pilot results columns show scores and rankings for each flight flown in the category, and the overall score and rank. Each row lists flight program and overall results for a single pilot.

A star ★ to the left of the pilot name means that the performance qualifies for an IAC stars achievement award.

The judge results metrics show rollups for all flights judged in the category. 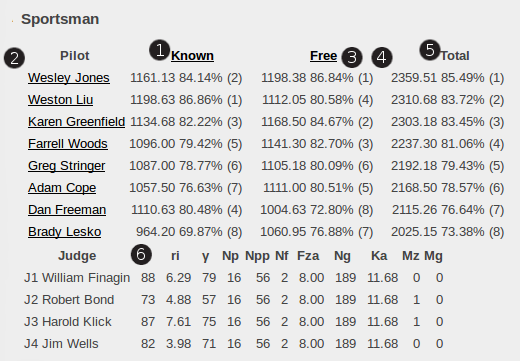 The flight results show how pilots of one flight program at one contest measured-up in front of one judging line. It shows rankings given the pilots by each judge, penalties, and points before and after penalties.

The details for a pilot show every grade from every judge for every flight flown by one pilot at one contest. 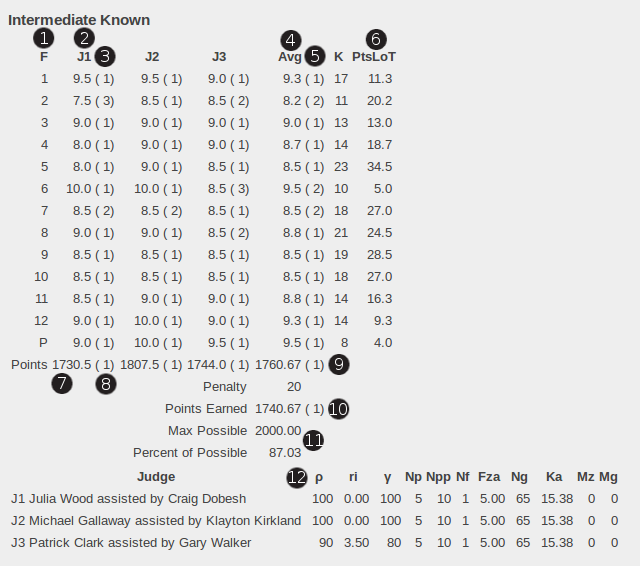 The judge metrics include three measures of how closely each judge ranked pilots relative to the overall ranking of pilots. The measures use pilot scores and rankings before penalties. Judges do not apply penalties. Penalties sometimes alter the final rankings of the pilots.

rho (ρ)
is the full computation of the Spearman Rank Corelation Coefficent formulated as follows, multiplied by 100.

ri
is the CIVA computation that scales differences in the judge score and overall score by the difference in rank. The formula is:

A zero RI represents perfect agreement in the rankings. Larger numbers are worse. Find more information about RI in the FAI Sporting Code, Section 6: Aerobatics, referenced below. The RI discussion begins at paragraph 8.8.1.

Contest values, category rollups, and career rollups use the average RI value from all flight programs. This procedure differs from that used for rho and gamma because RI contains a scaling adjustment for the number of pilots in the flight program. The scaling starts to dominate the value when there are more than fifty or sixty pilots.

gamma (γ)
is the Goodman and Kruskal gamma correlation coefficient multiplied by 100. The formula is:

Gamma ranges from -100 to 100. 100 is a perfect correlation. Zero means the judge's rankings are more or less random. Negative values mean the judge ranked the pilots more or less opposite the overall ranking. More if the value is more negative.

Contest values, category rollups, and career rollups track the total of concordant and discordant pairs from all flight programs.

To rank judges in the judge experience pages we use a non-normalized variant of the Goodman and Kruskal gamma correlation coefficient (γ). That is the top half of the gamma formula, N_c - N_d: the number of pilot pairs ranked in accordance with the result ranking minus the number of pilot pairs ranked opposite the result ranking.

Because judges who judge a lot get more or less the same proportion of pilot pairs ranked in accordance with the results, you'll see a strong correlation with the number of pilot pairs (Npp).

Given normal gamma, the ranking places judges first who have judged more and larger flight programs. That is, judges with more experience.